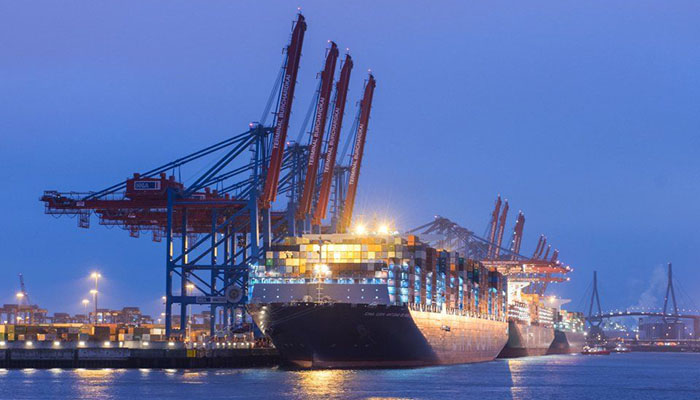 Global trade has never been static but is now witnessing more change than ever, driven by a multitude of factors from the politics of trade and new trade negotiations, to regional investment agreements and technology. These influences are converging in a way that is encouraging the growth of intra-regional trade while emphasising the importance of developing markets.

In Africa, for instance, new investment and the implementation of the African Continental Free Trade Area Agreement is expected to overhaul the continent’s traditional trading routes. Currently, intra-regional trade accounts for just 17% of Africa’s exports, compared to 59% in Asia and 69% in Europe. These regionally focused ambitions are set against a backdrop of growing economic nationalism and protectionism in the US and other developed nations.

At the centre of intra-regional developments is China’s Belt and Road Initiative (BRI), a series of highly ambitious, loosely defined and often contentious projects that aim to elevate trading routes between China and the rest of the world. Described as a ‘21st century silk road’, the two main thrusts of the project are made up of the ‘belt’ of overland corridors and a maritime ‘road’ of shipping lanes.

According to current estimates, total investment in the BRI will be anywhere from $900bn to several trillion during the next decade. Aggregate results suggest that BRI infrastructure improvements will boost total trade among BRI economies by 4.1%, with countries such as Uzbekistan, Iran, Oman and the Maldives potentially seeing as much as a 9% increase in their exports.

Inevitably, along with the many opportunities there are also economic and political risks involved, as intra-regional trade grows in importance and volume. Construction of major infrastructure projects in more weakly governed countries, and potential choke points arising along both centuries-old and newer trading routes, are among the exposures.

In its Global Risk Report 2018, the World Economic Forum (WEF) warned that the ambitious nature of the plans and approach to financing associated with investments in intra-regional trade, could exacerbate rather than prevent tension between economic corridor partners. WEF notes that potential triggers for unrest could result from corridors crossing contested territory. Any disruptions – caused by political unrest, natural perils or even piracy – could clog ports and raise commodity prices.

The use of containers has reduced the cost of transporting goods around the world, while making it the cornerstone of multimodal transport. However, the homogenous nature of the mode of transport and sometimes anonymous nature of the goods, is making it more difficult to track their movement and gain insight into which goods are consolidating and accumulating. Containerisation and the increased value and volume of goods being transported all serve to heighten potential disruptions, which can arise in certain ports and along particular maritime crossing points and at inland transportation centres.

As these risks grow and evolve, it is essential that insureds find new ways of measuring and managing their exposure to choke points, and decide whether to maintain a presence in these hotspots or whether to circumnavigate them. There are pros and cons associated with both approaches, and there is an argument that maintaining a presence in areas that are prone to congestion is a necessary evil in today’s complex trading environment.

Research by Chatham House has found that disruption of just one of the world’s eight key maritime choke points could have a major impact on global food security. It also found that more than half of all internationally traded grain must pass through at least one of 14 major choke points, while more than 10% depends on a maritime choke point to which there is no viable alternative. The diagram below visually illustrates the risks to global food trade at various chokepoints according to weather, security and political risks. 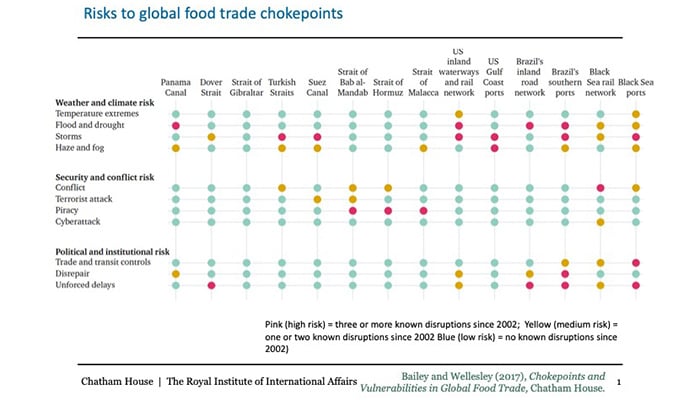 While alternative shipping routes to some of the world’s most important corridors, including the Panama Canal, Turkish Straits and Suez Canal have been proposed, including the Nicaraguan Canal, the Kra (Thai) Canal and even polar shipping routes, these potential substitutes have yet to be realised. Djibouti, the Maldives and Strait of Malacca are expected to remain potential choke points along the Maritime Silk Road for the foreseeable future.

Insurers and reinsurers can help clients understand the risks associated with choke points, managing concentrations of assets in one place and the potential ripple effects of incidents around the world. From Icelandic ash clouds to Japanese tsunamis and Thai floods, there are numerous examples of how natural catastrophes can impact global supply chains, both directly and indirectly. Through scenario analysis and portfolio stress-testing, insurers and brokers can help clients identify potential issues and develop contingencies.

As intra-regional trade grows in importance, it is also critical to work with the right insurance and broking partners to ensure multinational programmes are fit for purpose across all regions in which an insured operates. This is particularly important as developing markets open up. The importance of admitted cover in these territories ensures that cover is compliant and that there is assistance on the ground when losses occur. In addition to providing admitted coverage through a controlled master programme, local knowledge and resources support companies as they are navigating these developing territories. The ability to provide guidance on local best practices and regulatory requirements, as well as a holistic risk approach, are some of the benefits companies gain from partnering with a multinational insurer.