Smart motorways: in need of improvement? 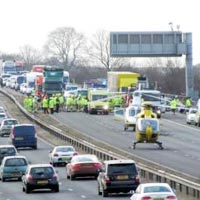 As the UK government confirms that it will undertake an urgent review of smart motorways following several tragic deaths, what is the future viability of such roads?

First of all, what is a smart motorway?

Smart motorways, or managed motorways as they were previously called, were first introduced in the UK in 2006. Across Europe, elements of smart motorways have been implemented since 2002

Highways England (previously the Highways Agency) developed these roads with the aim of increasing traffic capacity and decreasing congestion by using the existing carriageway space. Since that time, the network of smart motorways has grown significantly to include stretches of smart motorway on nine of the major networks and they now account for about 400 miles of England’s roads.

There are three main types of smart motorway:

Is life too fast in the slow lane?

Keen to emphasise the benefits of such motorways, Highways England published statistics from data gathered since the first smart motorway opened in 2006, to report that journey reliability has improved by 22%; personal injury accidents have been reduced by more than half; and where accidents did occur, severity was much lower overall, with zero fatalities and fewer seriously injured.

There were 77 deaths on traditional roads with a hard shoulder, compared to nine on the smart motorways network in 2018.

Yet not everyone has been convinced, with criticisms being voiced by a number of organisations including the motoring associations RAC and the AA, as well as MPs and The Coroner’s Service. Members of the public were also invited in early 2019 to sign a petition to scrap smart motorways, which received 1,179 signatures.

The RAC says: “In recent years, there has been a movement towards the permanent conversion of the hard shoulder into a running lane, which has concerned us. The removal of the hard shoulder fundamentally increases the risk to drivers who might suffer a car breakdown and are unable to reach a refuge area.”

Even chief executive of Highways England, Jim O’Sullivan, who was initially at pains to reiterate their safety, saying that there was a “disproportionate” focus on the risk, has recently called smart motorways “too complicated for people to use”.

What are the implications for drivers?

It is already an offence for drivers to proceed down a closed carriageway (a lane marked with a red X). However, a recent survey showed that more than 23% of road users disregard the red X and drive in closed lanes. Drivers falling foul of this face penalties of a fine, three penalty points and potential disqualification from driving.

However, when considering offences such as careless or dangerous driving, the court has to apply the objective test of a ‘reasonable driver’ and not that of ‘the perfect driver’, to the standard of driving.

With supporting expert evidence identifying the dangers and/or complications of smart motorways, a jury could be persuaded that a reasonable driver may themselves be confused, resulting in a collision.

Given that chief officials and MPs are themselves calling smart motorways “too complicated” and “simply not safe”, it is certainly conceivable that, depending on the circumstances of the case, this could also be raised as a mitigating factor for sentencing purposes.

It has been announced by the UK’s transport secretary that his department will conduct an urgent review into the safety of smart motorways, with a view to drawing up a series of recommendations in the next few weeks.

The impact of this review remains to be seen; however, in light of the above and with Highways England itself potentially facing corporate manslaughter charges following smart-motorway deaths, it appears that no more dynamic hard shoulder motorways will be constructed. It is hoped that serious consideration is given to the viability of these motorways before more fatalities occur.

Smart motorways: in need of improvement? added by Liz Booth on November 8, 2019
View all posts by Liz Booth →